Pupils differ significantly in terms of their individual characteristics and needs. It’s therefore important for schools to be able to identify and assess the level of need/disability, and provide for pupils with learning difficulties that call for special education provision, described as special education needs (SEN). Under the Additional Learning Needs and Education Tribunal (Wales) Bill 2018, a new framework on additional learning needs (ALN) replaced the existing legislation on SEN.

SEN cover a range of physical, behavioural and learning needs and can change over time. The relationship between SEN and exclusion has been studied previously. However, current understanding of changes in the identification of SEN during a child’s educational career and the classification of the SEN (eg, School Action Plus) remains limited.

This blog post is part of a series presenting preliminary findings from the “Excluded Lives” project – a multi-disciplinary collaboration across multiple UK universities. The study employs qualitative, quantitative and policy-oriented methods to investigate school exclusions across the UK. Our analysis, carried out in the WISERD Education Data Lab, looks at pupil records for children in mainstream education in Wales (not accounting for pupil referral units) to explore the association between special education needs and school exclusions.

What did we do?

The first two posts in this series used information on school exclusions recorded in mainstream schools across Wales between the academic years 2011/2012 and 2018/2019. Here, we focus on the period between 2011/2012 and 2016/2017 for which data on school exclusions and type of SEN were available (this cut-off point relates to the change in the classification of SEN into ALN mentioned above).

SEN provision was categorised as: no provision, School Action, School Action Plus and Statement (issued with a Statement of special education needs). SEN type was grouped into wider categories to avoid any confidentiality issues, as: mental health (including emotional difficulties), behavioural (including attention deficit and hyperactivity disorder), physical (including visual and hearing impairment), learning (including moderate and severe learning difficulties) and not applicable/classified.

What did we find?

A total of 353,642 pupils were identified as having been assigned a specific category of SEN. It’s important to note that we’re focusing on the first primary SEN identified (85% of pupils grouped as not classified), though a proportion of pupils had a number of primary and secondary needs identified at different stages of their education.

In terms of the primary SEN (Figure 1), it was observed that behavioural needs are generally identified at an earlier stage of a child’s educational career, peaking during key stage 2 (31.6% of all those identified as having behavioural needs as their primary), while learning needs are often identified at later stages, with the peak occurring during key stages 3 and 4 (31.2% and 32.2% respectively). In contrast, mental health and physical needs are fairly constant throughout the educational process but high across all key stages.

We further explored the distribution of primary SEN type across the study period (Figure 2). Among the total SEN identified, an increase was observed for pupils identified as having mental health (from 4.6% to 8.4%) or behavioural needs (from 0.7% to 2.9%). 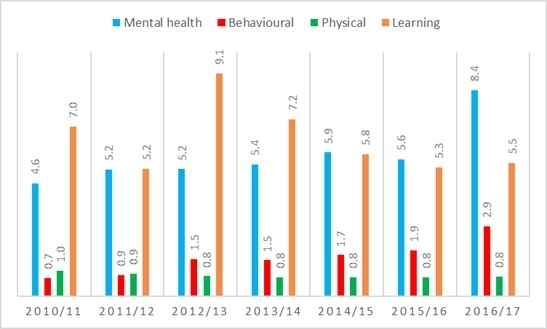 We then investigated how different types of primary SEN corresponded with SEN provision, as the provision pupils require and the educational placement they should attend can vary according to their needs (Figure 3). In this sample, the level of SEN provision varied by SEN type, with over half of those with mental health and learning needs being categorised as School Action Plus (60% and 51.2% respectively), while the majority of those with behavioural and physical needs were within the Statemented group (54.6% and 46.2% respectively). 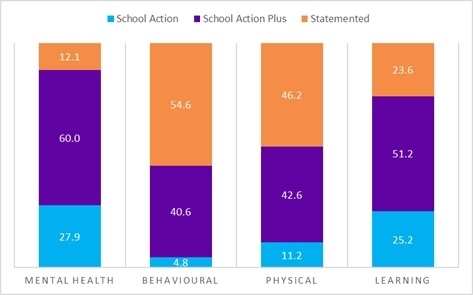 We were then able to explore the relationship between different SEN types and school exclusion (Figure 4). When comparing excluded pupils to the full cohort, there was a greater proportion of those with mental health needs who had experienced school exclusion (28.6% higher among excluded pupils), indicating that the presence of mental health and emotional difficulties could be closely linked to being excluded from school. 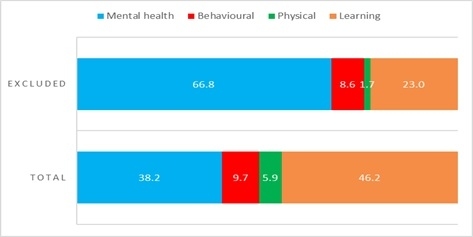 As this preliminary analysis only explored the primary type of recorded need it could be suggested that pupils with more complex needs or those whose needs change over time might be more likely to be excluded from school.

What do we plan to do next?

We plan to follow a cohort of students longitudinally to allow for an investigation of the risk factors of school exclusions and their potentially negative effects on pupils throughout their education. We’ll also investigate whether the likelihood of exclusion differs before or after the identification of SEN.

About the WISERD Education Data Lab:

WISERD Education Data Lab undertakes independent analysis of administrative education data, survey data and data linkage, alongside knowledge exchange and public dissemination of findings to inform national debate on some of the most contemporary and pressing educational issues facing Wales.

The statistics used in this report have been approved for publication by SAIL. This does not imply Welsh Government’s acceptance of the validity of the methods used to obtain these statistics, or of any analysis of the results. Rather, they have been deemed to be non-disclosive (i.e. individual pupils cannot be identified).